Recently I had an interesting conversation with Mike DiMartino about the 28A Connstellation long cornet and 38B Connstellation trumpet from which came a theory on the how and why of those instruments. In this article I will try to put forward that theory. Feel free to shoot holes in it.

From this we may draw the conclusion that the 28A long cornet was developed first, and that the 38B is a derivative of the 28A. In other words, the 28A is not a 38B with a cornet leadpipe. The 38B is a 28A with a trumpet leadpipe. This is a subtle but essential difference, as will be shown later on. The 10A and 10B were probably developed at the same time. More on that later.

Mike DiMartino has been play testing his original condition 1955 28A Connstellation against my overhauled but otherwise original (not relacquered) 1956 10A Victor, and has reached some interesting conclusions:

"The 28A must be much more conical than the 10A. It has true cornet tonal characteristics. One give away is that the low notes actually have more bass frequencies to them. These frequencies carry into the mid range of the horn, and this is what makes the horn sound "deeper" than the 10A. But as you play into the higher ranges, the tone begins to thin. I think of the tone, from low notes to high notes, as having a conical shape, tapering as you go higher. I have experienced this on every true cornet I have played. When comparing the 10A and 28A, I used a cornet mouthpiece that has an A cup of proper cornet depth (though not totally V-shaped) with a larger than standard throat, about a #25. So, I guess a shallower cup would noticeably affect these cornet characteristics. Not to mention, in the catalogs, Conn suggests using a more shallow mouthpiece if trumpet tone is desired; I can tell you, even with the above mentioned cornet mouthpiece, the high notes (over high C) definitely come much easier for me on the 10A, indeed another strong indication that the 10A cornet must have a much less conical, more trumpet-like bore than that of the 28A."

"All of the above is not so on the 10A! It plays more like a trumpet, more like my 22B Victor, for example. I am theorizing that the 10A bore is maybe not cornet-conical at all, and that the leadpipe's function is to simply accept a cornet mouthpiece, more than to form a conical cornet tone. You see, the low notes and mids are less bassy (deep), but the tone keeps uniform and full way up into the high notes. Nobody can tell me the 10A has a true conical cornet bore, if it has at all. And of course, the very shape of the wrap and bow is clearly conventional trumpet."

"Conclusion: The 28A is a real cornet-trumpet, a giant-sounding cornet that feels like a 0.500" bore! And you know what? I think I have figured out why Conn finished the Connstellations in nickel. Perhaps when Conn play tested the 28A, they found their giant cornet to sound maybe too dark in Coprion. The 28A's nickel plating definitely gives the horn more edge when you push for it (than the Coprion 10A). But then it has true conical cornet characteristics. The Conn geniuses designed it that way! They created a true cornet-trumpet, the most remarkable cornet-trumpet ever, in my view. Why, when you consider, artists, like Clifford Brown and his warmer trumpet tone, were coming into prominence, Conn may have developed the 28A, and next the 38B, in response to the growing interest towards darker horns."

This proves that the 28A Connstellation is, as Mike says here, a real cornet, just a very big one. The 38B trumpet then is this big cornet with a trumpet leadpipe. The 10B Victor trumpet on the other hand is a real trumpet, and the 10A Victor long cornet is a trumpet with a cornet leadpipe. An essential difference.

Between 1955 and 1958 Conn changed the leadpipe of the 28A and 38B Connstellation several times. It is difficult to know exactly in what way these leadpipes were different on the inside with regard to taper and bore. The outside of these leadpipes did change somewhat though, and it doesn't require a great leap of imagination to infer that the taper and bore must have also changed somewhat. Form follows function. With these leadpipes the external differences lay mostly in the joins of the leadpipe: how many and located how far along the leadpipe.

In 1956 and 1957 (probably starting with the 6xx,xxx range of serial numbers) the 28A and 38B leadpipes have an additional join about one inch beyond the mouthpiece receiver. This appears to be the same leadpipe that was used on the 10A and 10B of the same period. Since the 10A and 10B were first produced in 1956 (high 5xx,xxx serial numbers), they were never equiped with the leadpipe as on the 1955 28A. Mike and I suspect that this 1956-1957 leadpipe was somewhat less conical than the 1955 leadpipe, since perhaps the 1955 leadpipe was found to be too conical and hence a little too cornet like for the (then new) 38B. With the 10A/10B being essentially a "real" trumpet, Conn might have decided to use this 10A/10B leadpipe for the purpose. The 28A would then have followed suit. 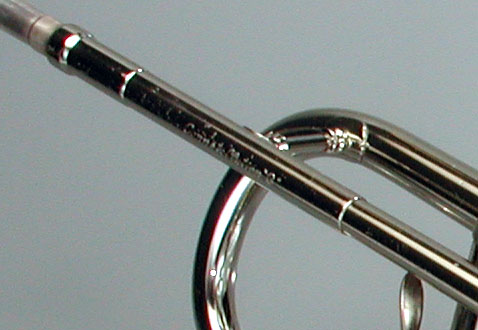 In 1958 Conn again changed the leadpipe on the 28A and 38B Connstellation. The new leadpipe was Coprion in stead of brass, and again was styled differently. The join about 3 inches from the mouthpiece receiver was no longer there, probably because it was easier to produce without that join in view of the Coprion process. The question is whether the bore and taper of this new leadpipe were also different. Allan Kamfonik has experience playing several 38B's, all of which were 1960 or later. He tested the 1955 28A Connstellation, and says it plays very differently from the later 38B's. Allan said "I've played five [1960's and later] 38B's and none played anywhere near as nice as [Mike's] 1955 28A." (In fact, Mike adds that he's hearing from more and more players who have discovered that the 10A/B for example is a much nicer player than the 38B. As one player says, "The 38B really isn't such an extrordinary horn. It's just that Maynard made the horn legendary. And he would've made any horn sound great.") The Connstellation, being a somewhat radical experimental horn, well may have worked most successfully in its original form--the 5xx,xxx 1955 first-year 28A cornet. Was the 1958-and-later leadpipe even less conical on account of the Coprion to make up for the fact that Coprion "darkens" the tone? Or was the bore and taper of this new leadpipe the same? In that case, adding the Coprion would have made it even darker.

Also in 1958 Conn radically redesigned the 10A and 10B (and 6A/6B) Victor. These new Victor models closely resemble the 1958-and-later Connstellation: wide wrap; Coprion leadpipe styled the same way as the new Connstellation leadpipe (and probably the same leadpipe). There is circumstantial evidence suggesting that the bell curve on the 28A/38B Connstellation was a little further back than on the Victor models. That would imply that the bell was slightly longer from the valve cluster to the bell flare than on the new Victor models. This (slightly) longer bell is a cornet characteristic, which again would make the Connstellation ever so slightly more cornet like than the Victor. Another question to contemplate is this: While in 1955-1957 Conn nickel plated the Connstellation so as not to make it too "dark", in 1958 they designed the 10A/10B Victor very similar to the Connstellation without the nickel plating. Was this a result of a trend towards ever darker sounding trumpets and cornets? Or could they do this because the new leadpipe was slightly less cornet like?

If the 1958-and-later Connstellation and Victor models are still more cornet than trumpet, which would appear to be the case from the overall shape but would depend in part on that leadpipe, then this would make the 22B Victor Conn's top "real" trumpet.