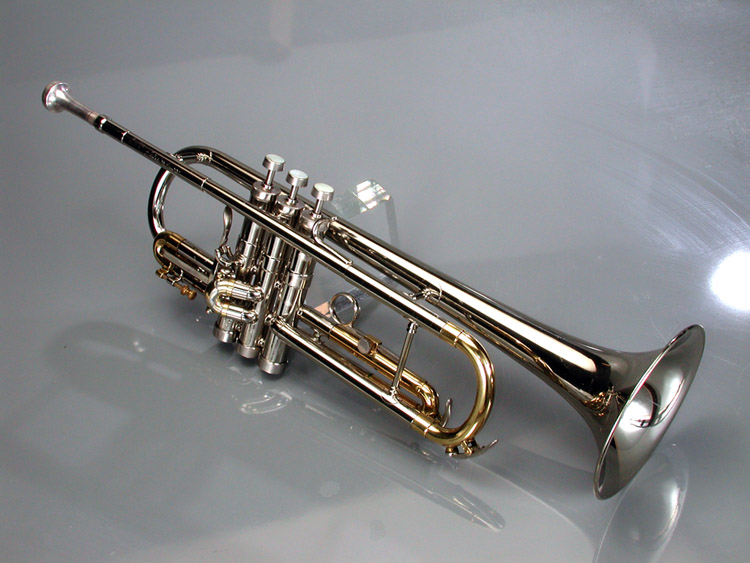 There are several variants of Connstellation 38B. The 1956 and 1957 versions (pictured here) used a style of valve cap that was specific to those years. It is a felt-less top valve cap. From 1958 Conn switched all trumpets and cornets to a style of valve cap with the felt on the top valve caps itself. These valve caps are either nickel-silver plated or lacquered brass. I suspect that from late 1959 (serial numbers 800,000 and above?) the rule was to equip nickel plated, nickel silver and silver plated instruments with lacquered brass valve caps, and lacquered brass and coprion instruments with the nickel-silver valve caps.

The issue of whether Connstellations have a Coprion bell has been discussed here in the past and different theories exist. In August/September 2009 I received information and then, by chance, strong evidence that has caused me to change my views on this again.

A former Conn employee said, and this appears to be confirmed by the 1960's Conn Product Manual and other reports, that Electro-D is a similar process to Coprion using non-copper metals. The former Conn employee said that an Electro-D bell was a brass bell, electrolytically plated with copper, and then electrolytically plated with nickel. These descriptions seem to match with each other and the evidence. This causes the Connstellation serial numbers to come in as follows (my educated guess):

The felt on all Connstellations, as all other Conns, is red. However, in the late 1970's Conn switched to Brown/beige. I am told by someone who owns a 1979 Connstellation that the felt on his instrument is brown/beige, and not red.

However, there are some strange 38B Connstellations out there. I happen to have owned one (and have seen pictures of others). They have brown/beige felt on the valve caps, and lack the "Elkhart" on the bell, suggesting late 1970's or later. The valve caps are lacquered brass in the style used starting in 1958. But it has a 1955 serial number (in the case of the 38B I used to own: 502321). The reason is because Conn recycled serial numbers at some point during the early 80's. My current hypothesis is that this occured during the "Henkin years" between 1980 and 1985. I have seen other Conn instruments (Euphoniums, specifically) with 1955-1957 serial numbers which the owner claims to have bought in the early 1980's. So if you see a 38B Connstellation with a serial number of 4xx,xxx, then it is definitely not 1950's (note: 38B. A 28B Connstellation would almost certainly have a 4xx,xxx serial). A 38B Connstellation with a 5xx,xxx serial is almost certainly 1980's; the 38B wasn't produced until serial 6xx,xxx (note: it could be a 28A Connstellation, but the same rules apply as to valve caps and other styling). Connstellations with serials 6xx,xxx: pay close attention to the styling details described above.

Don't confuse the 38B with the Connstellation 28A which is actually a long cornet. It can be very difficult to tell the difference between the two. Here are the two ways I know of. The first is to find out if it takes a trumpet or cornet mouthpiece. Connstellations built during the period that the 28A Connstellation long cornet was also in production will have a letter "A" or "B" stamped on the mouthpiece receiver. The "A" indicates a cornet leadpipe (28A long cornet), the "B" indicates a trumpet leadpipe (38B). The other way is subtle distinction, but should be apparent in most pictures if you know what to look for (and it is also the reason the picture on this page was changed; the previous picture was a 28A I now realize). If you look along the leadpipe you will see the diameter of the leadpipe increase immediately after the finger hook. This extends to the main tuning slide. It is where the main tuning slide inserts into the leadpipe. On a long cornet the length of this tubing with increased diameter is only half the length, and it starts halfway between the finger hook and the main tuning slide. See picture. Also see the 28A for a picture of this (that is the picture previously on this page). This might also be a way to distinguish a "real" 38B from a 28A with a replacement leadpipe/mouthpiece receiver. The internal bore and taper (conical-ness) is quite different between the 28A and 38B, but this isn't obvious from the outside.

The 38B Connstellation is the succesor to the 28B Connstellation, which also featured the first slide trigger. The 36B lightweight Connstellation came out in late 1959. It has a smaller bell and the 38B has sturdier bracing than the 36B. This can be seen by comparing the main tuning slide brace of the 38B pictured here with the 36B picture on its own page. Early models 36B, through at least 1962 don't have a trigger on the first slide. Later models 36B (at least 1966 and later) do have the trigger on first. Otherwise the 36B and the 38B are the same including the nickel plating. This makes it somewhat difficult to tell a later model 36B and a 38B apart. The quickest way to tell the difference is to compare the bracing. The other option is to measure the size of the bell.

Apparently Conn (UMI) tried to produce 38B's again at one point but couldn't get it quite right. Going back to the original specifications and tooling wasn't an option because those had been destroyed at one point.