Main index > Trumpet Page > What do the Trumpet look like > 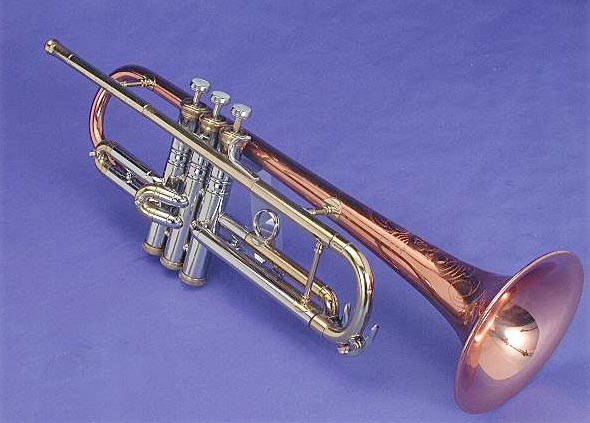 Notice the coprion bell and the nickel trim. "Early" models built between 1955 and 1957 have a fixed 3rd slide finger ring, bottom spring valves and don't have a coprion leadpipe. This is the original "Victor" design which in 1961 was re-used without the Coprion or nickel trim in the 25B, 35B and 2A (C, D and Eb Victors, respectively. See "Comparative quality of Conn instruments, part 2" for more information). The 10B didn't appear in the 1955 Conn catalog which featured an updated 12B Coprion with nickel trim (resembling a pre-war 12B Coprion Special) and heavier than earlier 12B's. Since the 12B was discontinued in 1955, I suspect Conn changed its mind on the new version of the 12B and went with what became the 10B in stead. Compared to the modified 12B Coprion, the early version 10B was heavier still (2 lbs. 12 oz.) and had even more nickel on it.

This 10B has been relacquered. This is quite easy to tell on an instrument with a Coprion bell; Conn lacquer tends to turn darker with age and this is easpecially easy to tell on a Coprion bell. For a picture of a not-relacquered Coprion bell, see the 12B Coprion or 12B Coprion Special. As far as I am aware it has no effect on the sound of the instrument. While the change in the lacquer has no effect on the sound, Coprion has the effect of making the sound "darker". Since the "late" model 10B has a coprion leadpipe in addition to the coprion bell, I would expect it to sound somewhat darker than the 1955-1957 model 10B which doesn't have the coprion leadpipe. But the difference might be subtle. In either case, the 10B Victor sounds a lot darker than the 6B Victor, for being otherwise identical. The 10B Victor was produced between 1955 and 1962.

How to tell a 10A Victor long cornet and a 10B Victor trumpet apart? The differences are quite subtle, but you should be able to tell if you know what you are looking for. All models for which there is both a long cornet and a trumpet (6A/6B, 10A/10B, 28A/38B) have a letter "A" or "B" stamped on the mouthpiece receiver, or on 1955-1957 models engraved on the leadpipe immediately following the name. An "A" indicates a cornet leadpipe, a "B" indicates a trumpet leadpipe. The second way is to look at where the leadpipe widens out to accomodate the main tuning slide. On a trumpet this happens directly after the leadpipe finger hook, on a long cornet about an inch further down the leadpipe from the fingerhook. See picture.

On January 3rd, 2004 I had the opportunity to play a 1956 10B Victor very similar to the one in the top picture, in perfect condition, except this one had original lacquer. This was the first time I played an instrument with a Coprion bell but without a Coprion leadpipe. Without that Coprion leadpipe to me it definitely sounded less dark. On it I could produce a huge volume without the sound breaking up or cracking. And the Coprion bell really projects like nothing else. I found all of this much easier to notice on this 1956 10B Victor than on the later 10B Victor I have played. Admittedly the 1962 10B Victor I had played was in "less than perfect" condition. This 1956 10B Victor was probably one of the best instruments I have ever had the privilege of playing.

See also the "Late" version of the 10B Victor.