Since I created my website from time to time I get asked what model instrument someone has, or to confirm what someone thinks the model is they own. So, this article is my attempt to provide a guide to recognizing the different models trumpet produced by Conn over the years. As usual, this guide doesn't cover models first produced after 1969. Also, I assume that an instrument is in original, unmodified condition. I am not claiming that this is a complete guide covering every single model, but it should cover most bases.

The very first thing you need to do is to check and look up the serial number. The serial number is alway stamped on the second valve casing. Check the number stamped there against the Conn serial number list by Lars Kirmser. This should tell you what year the instrument was built. There are some pitfalls here though. If your instrument has a serial number in the 500,000 and possibly 600,000 range and it turns out to be a 38B Connstellation then a red warning light should turn on in your head. More about that later. Also note that serial numbers on Pan American models don't match Conn serial numbers.

The next thing to do is to check for model names or numbers. For a period during the 1930's and 1940's Conn stamped the model number underneath the mouthpiece receiver. I suspect this is the case for instruments with a serial number starting with "3" (1935-1952). It might not be easy to see (worn, not stamped very deeply, dirty, etc.), so look closely under a bright light. If you see a model number there (such as "2 2 B"), you are home free. See picture below. Else check if there is a name engraved on either the side of the mouthpiece receiver/leadpipe or the bell. Check that name against the list below, which also gives some distinguishing features. 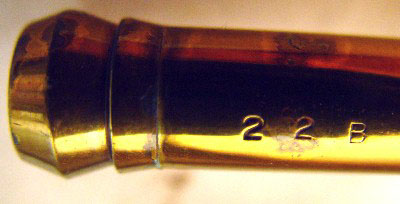 If your Victor has a Coprion leadpipe but not a Coprion bell it is a late model 6B, serial number 7xx,xxx and up.

The 8B is either completely lacquered brass or completely silver plated. The 8B doesn't have any nickel trim. It has top spring valves, and a 4 5/8" bell and an adjustable 3rd slide finger ring. Any Victor without any Coprion with a serial number of 1963 or later that doesn't have any nickel trim or is entirely silver plated is an 8B, else it is a 22B.

If your 6B or 10B has the letter "A" stamped on the mouthpiece receiver, it is in fact a 6A or 10A long model cornet. Don't be unhappy that it isn't a trumpet. The 6A and 10A models are quite rare and very nice instruments! Read The Long Model Cornet: Fish Nor Fowl? for more information.

Connstellation
A Connstellation trumpet can be either a 28B, 36B or 38B. If your Connstellation is lacquered brass with nickel trim, it is a 28B. In that case it will have a serial number dating to 1955 or earlier. The alternative is that your Connstellation is completely nickel plated, in which case it is either a 36B or a 38B. If it doesn't have a first valve trigger, and never did have a first valve trigger (!), then it is an early model 36B. Probably 1959-1963. Later models 36B do have a trigger and are somewhat more difficult to distinguish from 38B's. The 38B has a large 5 1/8" bell, the 36B's bell is 4 5/8". Also, the 36B's bracing isn't as heavy as that of the 38B. This is a bit difficult to describe here. Please compare the brace near the main tuning slide of the 36B and the 38B to see the difference. If your Connstellation has the letter "A" stamped on the mouthpiece receiver, you have a 28A Connstellation long model cornet. These are very nice instruments in their own right. Read The Long Model Cornet: Fish Nor Fowl? for more information.

Coprion
This is a 1955, possibly 1954 12B Coprion. A rare instrument indeed, because in 1955 Conn modified both the 12B Coprion and 22B New York Symphony by increasing their weight and adding nickel trim. The 22B Victor (as it was now called) remained in production throughout the 1960's, but the modified 12B Coprion was dropped in 1955 and replaced by the 10B Victor. If you own one of these 12B's with "Coprion" engraved on the leadpipe: it is rare! And please drop me a line.

If the instrument has an adjustable third slide finger ring and nickel trim on the slides but not on the valve casing it is a 17B or an 18B. Early models 18B have diagonal braces. Later models 18B and 17B's have (in Conn terms) normal straight braces.

Trigger on first slide
The first valve trigger was used on the 2B Symphony, 8B Symphony Special, 25B, 28B, later models 36B and 38B.The 2B and 8B models are distinct because of the third slide finger ring which is below the third slide. Telling the difference between the 2B and 8B is very difficult. The 25B is a C trumpet with an adjustable third slide ring and bottom spring valves. To differentiate between the 28B, 36B and 38B see above under "Connstellation".

Nickel trim valve casing
If the valve casing is brass with nickel trim (and not entirely nickel plated), it could be either a 12B Coprion Special, 22B New York Symphony Special or a 28B Connstellation. The 12B Coprion Special has a Coprion bell, the 22B New York Symphony Special doesn't.The 28B Connstellation has a trigger on the first slide. Other than the Coprion bell the 12B Special and 22B Special are identical except for one minor detail, it would appear: the 22B Special has a lyre holder on the third slide, the 12B Special doesn't.

Nickel trim slides only
If there is nickel trim on the slides, but no nickel trim at all on the valve casing, it could be a 14B, 15B, 17B, 18B or 77B. The 17B and 18B both have a Coprion bell, the others don't. The earlier models 14B and 18B have distinctive diagonal braces as opposed to the normal straight braces. The 77B has top spring valves, the others are bottom spring. This of course might be a bit tricky to tell from the outside.

Bottom third slide finger ring
Several models fall into this category: 2B Symphony, 8B Symphony Special, 10B New Era, 40B, 56B and 58B. The 2B and 8B both have a trigger on the first slide. The 40B is the one with the rimless bell and octagonal valve casing. The 10B, 56B and 58B are "New Era" models. The 10B, 40B, 56B and 58B all are longer and narrower than trumpets built more recently.

Saddle on first slide
2B New World Symphony. Warning! Eventhough the 2B New World Symphony (not to be confused with the later 2B Symphony) was the only Conn trumpet to have a saddle on the first slide, "post-Conn" 1970's and later trumpets tended to have saddles. So if your Conn trumpet has a saddle on the first slide, you better make sure of the serial number and check it against the picture of the model on this site.