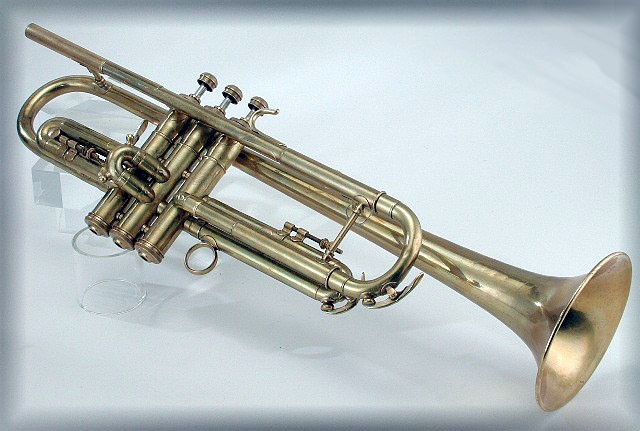 Notice the first slide trigger and the position of the third slide finger ring. The 8B Symphony Grand was built between 1932 and 1940. It had a #1½ bore (0.458"), although in an interesting quirk, the first valve slide is a 0.480" bore, a feature it shares with the (post-war) 2B New World Symphony and 28B Connstellation.

What Conn said in 1937:
The Symphony Grand 8B is newly designed for discriminating players in large symphonies and bands where big, powerful tone, scale of unusual flexibility, and just the right amount of resistance are paramount. Has a one-piece bell made of specially processed metal called C-17, an innovation bore taper and other features found on no other trumpet. Used by Joseph Gustat, first chair, St.Louis Symphony; Phil Napoleon, featured artist at NBC, New York; Herman Faberman, for over 10 years with Horlick's A. and P. Gypsies, and also with Maxwell house Show Boat; Wm. Tong, radio celebrity and for six years first chair with Sousa; Charles Spivak, first trumpet with Ray Noble. Bb and A, medium bore, with or without trigger mechanism for first valve slide, Clickless Crysteel valves