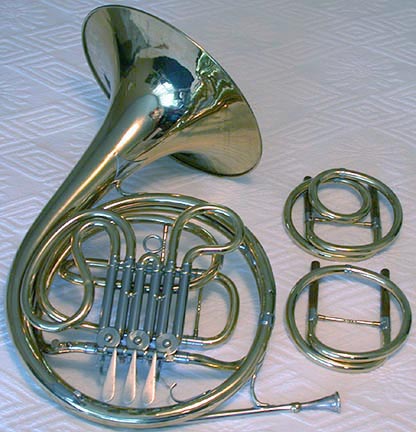 This French Horn has seperate tuning slides for F, Eb and D. The fact that it has nickel trim indicates it is the 4D model that was produced from 1929 to 1939. It was available with or without stop valve. This particular instrument isn't equipped with a stop valve.

What Conn said in 1938:
This new model 4D single horn in F is creating quite a stir among leading horn players of the country. They like the unusual ease with which it is blown and the extremely fine accuracy of scale. They mention particularly the free quality of the E in the staff and the ease with which B-natural and C above the staff can be played. They also comment on its beautiful tone quality and its simple, symmetrical design, which eliminates unsightly braces and all sharp bends in tubing which make other horns hard to blow. Favorite with second and fourth horn players because they say only on the F can the true French horn quality of tone be obtained. Many find the F horn adequate for all needs. Transposition has become second nature to them and they find they can play equally well in all keys on the F horn. Complete with Eb slide; D slide sent no charge on request at time of original order. Stop valve for bringing notes into tune that have been sharpened by hand stopping, can be supplied on original order at additional cost. It cannot be ordered later, as it must be built into the horn. Most players of the single F horn compensate for stopping by transposing and using the second valve.