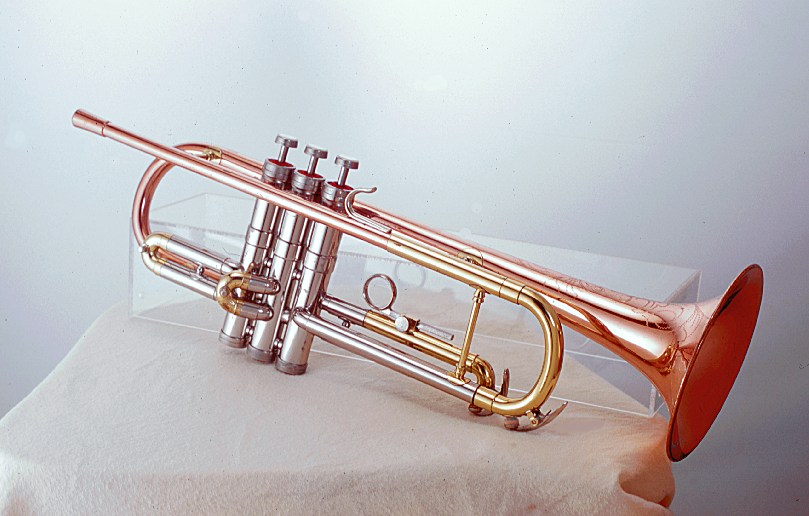 Notice the coprion bell and leadpipe and the nickel trim. "Late" models built from 1958 have an adjustable 3rd slide finger ring, a wide wrap, a coprion leadpipe, top spring valves and the style valve caps used throughout the 1960's (bottom picture). This later model is styled after the 28A/38B Connstellation.

This 10B has been relacquered. This is quite easy to tell on an instrument with a Coprion bell; Conn lacquer tends to turn darker with age and this is easpecially easy to tell on a Coprion bell. For a picture of a not-relacquered Coprion bell, see the 12B Coprion or 12B Coprion Special. As far as I am aware it has no effect on the sound of the instrument. While the change in the lacquer has no effect on the sound, Coprion has the effect of making the sound "darker". Since the "late" model 10B has a coprion leadpipe in addition to the coprion bell, I would expect it to sound somewhat darker than the 1955-1957 model 10B which doesn't have the coprion leadpipe. But the difference might be subtle. In either case, the 10B Victor sounds a lot darker than the 6B Victor, for being otherwise identical. The 10B Victor was produced between 1955 and 1962.

How to tell a 10A Victor long cornet and a 10B Victor trumpet apart? The differences are quite subtle, but you should be able to tell if you know what you are looking for. All models for which there is both a long cornet and a trumpet (6A/6B, 10A/10B, 28A/38B) have a letter "A" or "B" stamped on the mouthpiece receiver, or on 1955-1957 models engraved on the leadpipe immediately following the name. An "A" indicates a cornet leadpipe, a "B" indicates a trumpet leadpipe. The second way is to look at where the leadpipe widens out to accomodate the main tuning slide. On a trumpet this happens directly after the leadpipe finger hook, on a long cornet about an inch further down the leadpipe from the fingerhook. See picture.

See also the "Early" version of the 10B Victor.

What Conn said in 1959:
Another Conn first... a trumpet with exclusive seamless Coprion bell and tone chamber that adds new depth to fine trumpet sound. In the small orchestra or the largest band, this trumpet will blend and add quality to ensemble. Only Conn can offer the Artist Coprion trumpet with these features: seamless Coprion bell and tone chamber, Cali-Bore, pin-guide Crysteel valves. Highly polished Coprion with brass trim protected by Lustre-Conn long wearing finish. Length 21¾", bell diameter 5 1/8".

What Conn said in 1963:
Two [other is 6A] great horns patterned after the 38B. Bother are 21 3/8" long with 5 1/8" bells. 10B has a big, easy-to-blow low register ... extremely flexible and easy high register. Does not overload at full volume. Coprion with brass and nickel trim. Complete with Connstellation case.