These were produced, according to Conn, from 1932 to 1949. However, I have never seen one with a post-war instrument, and very much doubt these were produced after 1941. As for the start date, none of the catalogs I have seen dating between 1930 and 1941 mention Gold-Tone mouthpieces. Since they most certainly did exist, an actual start date is difficult to determine. Quoting the January 1969 issue of Conn Chord magazine: "Here was a significant departure from early mouthpiece making. The "Gold-Tone" mouthpieces were as much articles of showmanship as they were musical developments. In both appearance and comfort of playing this "Cushion-like" designed mouthpiece had much to offer the jazz bands and big dance bands of the '30's and '40's." (Copyrighted, 1968, By Conn Corp.)

These pictures show a Gold-Tone 22 trumpet mouthpiece from different angles. 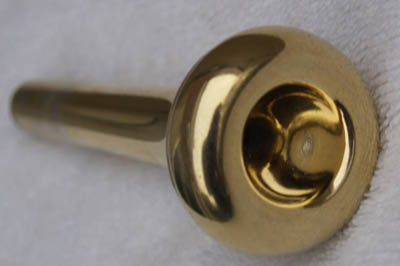