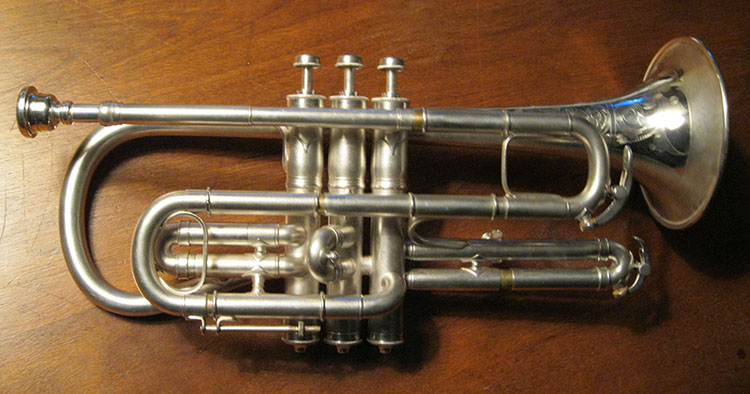 When Conn was still owned by Col. Conn himself models cornet that resembled each either very closely: the Perfected Wonder, and the New Invention Circus Bore. For a long time I thought these were the same model. However, the cornet expert and collector H.M. Lewis has explained to me how to tell the difference.

In 1911 the Conn factory was destroyed by fire. It is reasonable to assume that as a result a redesign of certain models took place; after all, they had to restart from scratch anyway. This is where the new Invention Circus Bore came in: visually extremely similar to the Perfected Wonder, except that the tube between the 3rd and 2nd valve is horizontal. In spite of its name, the "Circus Bore" model was available in small, medium and large bore. That should correspond to bore sizes of 1½ (0,458"), 2 (0.468") and 2½ (0.484"), respectively. It is my impression that the large bore version was most common. The instrument pictured is a small bore version. The Circus Bore model was made in both high and low pitch and was produced from 1911 to about 1920.