With Elkhart Conn instruments being in the "vintage" category, from time to time instruments modified in various ways appear. In this article I will try to address this sensitive subject, and give my opinion on the matter. Mind you, this just my opinion.

I define a modification as something that is not original to the instrument. This can be categorized several different ways. I will start with two categories:

There are different areas of ways in which an instrument can be modified: several varieties of changes to the finish and the replacing of parts with non-original parts.

Changes in finish
Changing the finish of the instrument is perhaps the least intrusive of changes that can be made. This can be either relacquering, replating (silver or gold), silver or gold plating a lacquered instrument or vice versa, or stripping to raw brass.

Replacements in case of damage should ideally be done using parts from the same model instrument. If not of the same model-year, then of the same model of a different year. This scavenging is a good idea if it will keep an otherwise perfectly good instrument in service. Hopefully the scavenged instrument is beyond repair. If model-original parts aren't available, other (as similar as possible) parts are sometimes used in stead.

Sometimes long model cornets such as those produced by Conn in the 1950's are seen with a replacement trumpet leadpipe. I really like those trumpet shaped cornets, and think it is very unfortunate that these rather rare instruments have their perfectly good original leadpipes replaced. At least the replacement leadpipes are usually by Conn, retaining at least some of the character of the original. However, there are 28A Connstellation long cornets out there that have had their original, perfectly good leadpipes amputated and replaced by a Bach trumpet leadpipe. Ostensibly this "opens up" the instrument making it blow "more feely". Anyone who considers a Connstellation, regardless if it is a 28A of 38B, as anything less than free blowing is doing something seriously wrong. If the motivation for commiting an act like this is to get rid of the cornet leadpipe and mouthpiece, I would suggest to get over the idea that cornets are inferior, get an appropriate cornet mouthpiece whether with a trumpet or classic cornet style cup, and in stead impress everybody with the great sound, in both volume and tone quality, that can be achieved with these instruments.

Mixing and matching
On occasion instruments can be found in which a part was not replaced with an as close as possible match from a scavenged instrument, but from a different model. I feel the distinction here should be whether the modification was performed to get rid of an undesired part of an instrument, or whether the modification was performed to create a significantly different instrument. An example of the former is (in my opinion) the replacement of the leadpipe of a long cornet with a trumpet leadpipe. This was discussed earlier. An example of the latter could be the replacement of a brass bell with a Coprion bell; the original brass bell, being severely damaged requiring replacement, wasn't undesirable in itself, but using a Coprion bell as a replacement part gives a substantially different, and interesting, instrument. An example of this is the instrument pictured here. Originally 1960 22B Victor of which the bell was badly damaged. The replacement Coprion bell is from a 17B Director, and was stripped (see above). The modification was done professionally by Rick Pellegrino of Rick's Musical Instrument Repair of Rochester, New York. In combination with a Coprion bell the 22B Victor is about as close as anyone is liable to get to a very rare 1955 12B Coprion, which is essentially the 22B Victor with a Coprion bell. The person who now owns this instrument says he likes it very much. 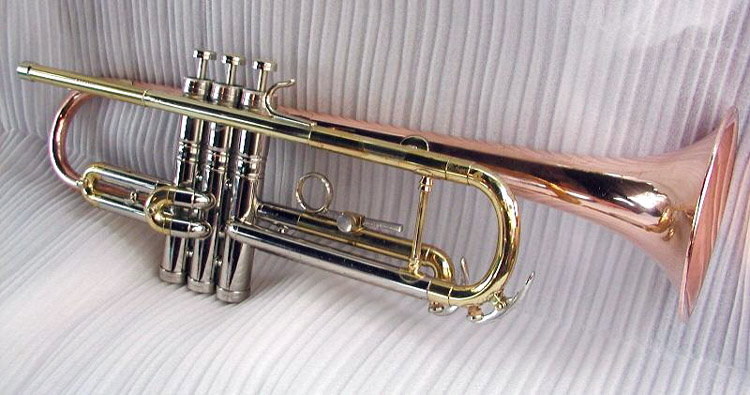