Introduction
In this article I will try to shed some light on how to judge the condition of the lacquer on Conn instruments. The condition of the lacquer of an instrument can be relevant to its value when it is for sale on for example eBay. This article, however, is going to be a strictly technical discussion. I am not going to put dollar values on anything here. I leave these considerations to the people involved with the instrument.

The lacquer used on Conn instruments was quite durable compared to that of some other companies of the day. Conn once had an ad which showed someone pouring acetone over the ("Lustre-Conn") lacquered bell of a Conn trumpet. The text reads: "This is a brutal test. Pouring acetone on the finish of even a new horn will skin it quicker than you can peel a banana. Unless it's a Conn! The finish used on them is called Lustre-Conn. It is not only impervious to this powerful chemical solvent... it also resists body acids, alkalines, heat, scuffs and scratches as well." Although over time we have learned that even Lustre-Conn isn't resistant to the perspiration of everyone (among other things), many instruments with Conn lacquer have held up quite well over time.

Original or Relacquered?
Whether an instrument is relacquered or still has the original lacquer on it can be an important consideration. There are some ways to make this judgement. The most important one is the color of the instrument. Original Conn lacquer for some reason is a slightly different color than the lacquer found on relacquered instruments. This may be a function of age or perhaps the composition of the original lacquer or both, I don't know. 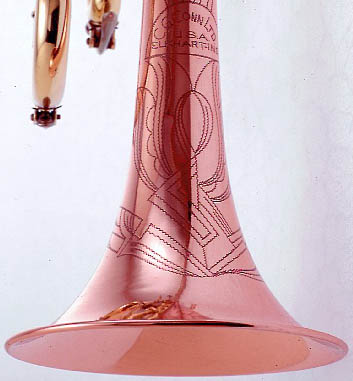 When the instrument doesn't have a Coprion bell, the difference is more difficult to see. Below are two pictures, side by side, of relacquered brass on the left and original Conn lacquer on the right. Both instruments are from the late 1940's. It so happens both also have a Coprion bell, visible in the background of each picture. If you whish you can compare the colors of these as described above.

Dark spots in original lacquer of the 1930's and 1940's
It is rare to find an instrument with original lacquer in absolutely perfect condition. This is especially unlikely for instruments from the 1930's and 1940's. Instruments from that period can have dark spots in it. These spots usually appear to be more or less olive green. This can range from a medium hue to very dark. These dark spots are nothing to worry about, it is strictly a discoloration of the lacquer itself. People who have stripped instruments so affected tell me that the brass underneath was perfectly fine. The picture below shows an extreme example of this phenomenan. 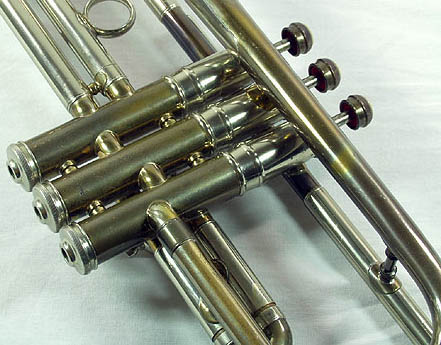 I have not seen these olive green spots appear in instruments produced in the 1950's or later. I guess Conn changed the formula for the lacquer it was using sometime in the early 1950's.