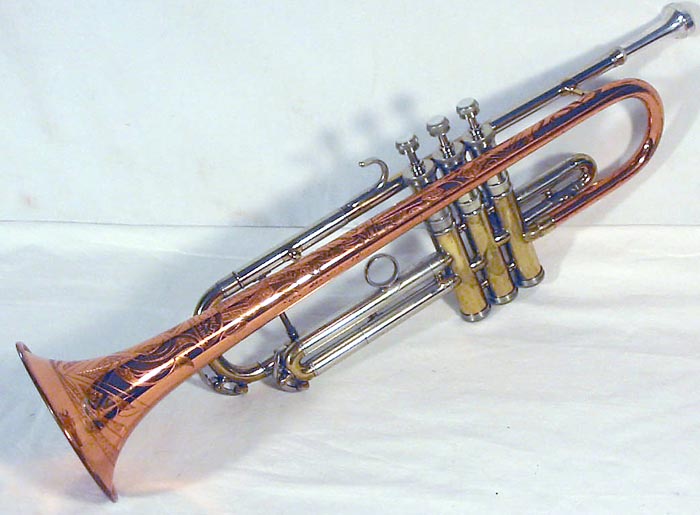 This is a very rare instrument. It is the "special" version of the regular 12B Coprion. The "special" is in the nickel trim and the extensive engraving on the bell.

The serial number on this instrument dates it to 1937, which would indicate is predates the first production year listed in the Conn trumpet model number index on R. Jones' website by two years. My theory on that is that Conn used existing, partially assembled, 22B New York Symphonies (Special) with 1937 serial numbers. Afterall, Conn documentation indicates the Coprion process was invented in 1938. I have come into possession of a Conn trumpets and cornets brochure dated April 1938; it doesn't list the 12B. All this suggests an instrument with a Coprion bell couldn't have existed before 1938. Since the 12B is essentially a 22B New York Symphony with a Coprion bell, it isn't unreasonable to assume that in 1938 (or 1939, as the case may be) Conn used partially assembled 22B's (Special) it had, with 1937 serial numbers, and added a Coprion bell to make a 12B Special. It would be interesting to see if these 1937 12B's have "2 2 B" stamped underneath the mouthpiece receiver or "New York Symphony Special" engraved on the leadpipe, which would confirm this theory. If true, this might also explain why the Conn trumpet model number index on R. Jones' website incorrectly lists the 12B as the "New York Symphony".

The "12B Special" is identical to the "22B Special" with the obvious exception of the Coprion bell and one other small detail: The 12B Special doesn't have a lyre holder on the third valve slide. The 22B Special as well as both the "standard" 12B and 22B all do have this lyre holder. Occasionally you come across what appears to be a 22B Special (brass bell) without any engraving on the bell and without this lyre holder. This identifies such an instrument as a 12B Special with replacement bell. Presumably the bell was damaged beyond repair at some point and replaced with a standard brass bell, not engraved.

A list of the features of this instrument would include the Coprion bell, probably crysteel valves (but that is a guess), the nickel trim, the extensive engraving on the bell. This instrument appears to (still) have an original mouthpiece. The pictures on e-bay also show the original case which appears to be in pretty good shape, together with the original documentation. If anyone would like me to post those pictures on this page as well, please let me know. Also notice it has a fixed 3rd slide finger ring. Conn trumpets in the 30's and 40's unvariably had fixed 3rd slide rings like this one. In the 50's and 60's most Conn trumpets and cornets were equiped with adjustable 3rd slide finger rings. From the picture it would appear that the lacquer is slightly darkened with age judging by the color of the brass and the coprion bell. This is normal. I suspect people who own a pre-1970 lacquered Conn may have noticed that the lacquer is slightly darker than on other (modern, non-Conn) instruments. I don't know if this is a characteristic of the ageing "Lustre-Conn" finish applied to Conn's or if all lacquer tends to do that over time. Either way, it doesn't do any harm. The 12B has a #1 Bore, which is 0.438". The person selling this instrument on e-bay describes it as being (in his opinion) superior to Mt.Vernon (New York) Bach's in the way it plays. Truly an exceptional instrument.