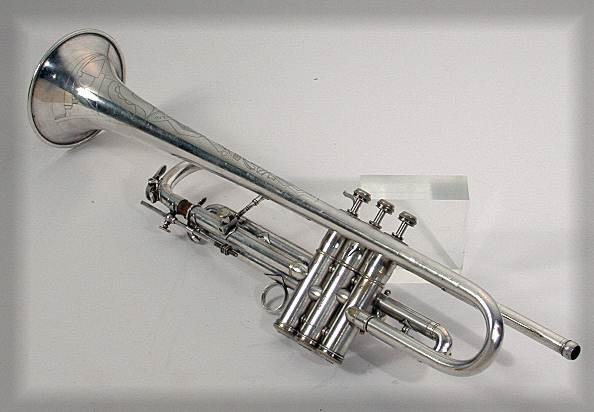 What Conn said in 1933:
This is the model which set a new style in trumpets back in 1928. It became so popular that practically every manufacturer was forced to add a long model trumpet to his line. But only Conn makes the genuine New Era. No copy has ever quite equalled the original model - copies never do. Today's New Eras are even more brilliant in performance and striking in appearance. Equipped with the new CRYSTEEL valves, their valve action is even swifter and lighter. Their new engraving and braces have made them even more modern and sporty. Their quick responsiveness and smooth, even scale give dazzling speed in all registers. Their crystal pure trumpet tone "cuts through" everything. They make the heavy demands of modern engagements pleasurable and easy. Small bore, 58B; medium bore, 10B. Key of Bb and A, springs in bottom of valves.

What Conn said in 1939:
The 10B is a narrow, streamlined, racy looking model which is much in demand by those who want modern design. Although long, it is well balanced and easy to mute. Its tone is big and powerful and brilliant. Medium bore, Bb and A, finger ring on third valve slide. Equipped with Clickless Crysteel valves.